The students of KCC Institute of Legal and Higher Education have allegedly been charged an extra fee amount by the college.

As told by the students, a legal notice regarding the fee submission was issued by the institute on 29th July 2020. As per the notice, students were supposed to deposit the annual course fee Rs 67,000/- by 10th August 2020 positively, failing which a fine of Rs 50/- per day was to be charged.

Students reportedly paid the fee amount before the given deadline and received no valid fee receipt for the same.

Read More: GGSIPU Fees Issue: 60% Students Not in A Position To Pay Fee.

On 7th September 2020, another notice was issued by Guru Gobind Singh Indraprastha University specifying the whole fee structure for the three academic years (2019-2022). In the same notice, GGSIPU specified the fee which the KCC Institute was supposed to charge from all the students, i.e. Rs 48,840/- (Academic Year Fee), Rs 12,000/- (University Examination Fee), and Rs 1000/- (Student Activity Fee) which makes the total fee amount of Rs 61,840/- 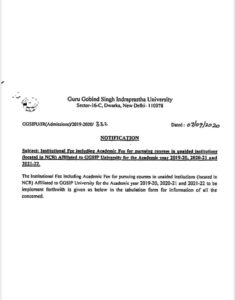 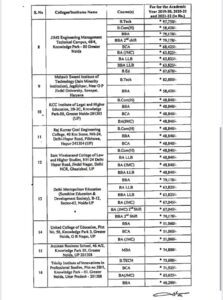 On 12th September 2020, another notice was put up by GGSIPU specifying 15th October 2020 as the last date for payment of the fee but students already paid the fee amount in August.

Considering the notice issued by GGSIPU regarding the fee structure, the students are in anguish and demand answers to why they have been charged extra by the college.

As told by one of the students from the institute, they have been trying to contact the Registrar, Director, and other authorities of KCC Institute via calls, texts, and emails to know whether the extra paid amount will be refunded to them or not. And if not, then why?

The authorities are reportedly ignoring their pleas and aren’t responding to any of their calls or emails and are trying their best to reach the authorities.

IPU Buzz tried reaching the KCC Institute of Legal and Higher Education to record their comment on the entire issue but received no response from their end.

Suggested For You: All You Need To Know About GGSIPU Students On Fee Issue