Ever since the passing of the new Farm Bill, Indian farmers have become heated up and are protesting consistently for the repealing of the new laws.

Highlighting further developments, the Indian farmers have called for a one-day nationwide strike on Tuesday after days of blockading New Delhi in a bid to force the government to lift its new ‘market-friendly’ farm laws. 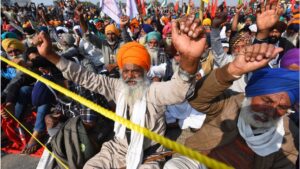 Based On Your Choice: Farmers’ Protest: Big Concerns and Problems

In support of the farmers, railway workers, truck drivers and other unions have also come forward to join them in the strike.

However, this strike is claimed to be a peaceful protest. The farmers said that they will ensure that emergency services such as ambulances and fire brigades don’t get affected.
“Our protest is peaceful, and we’ll continue that way. Bharat Bandh is a symbolic protest to register our opposition. It is to show that we don’t support some of the policies of the government,” farmers’ union leader Rakesh Tikait told reporters.

The strike has been called after five unsuccessful rounds of talks between farmers’ unions and the government. The sixth round of talks is scheduled for Wednesday.

The farmers, with their camping, which started from November 27, said that they will not return home until the laws are repealed.

What is the new farmer Bill 2020 and why are they protesting?

On 27 September 2020, the Indian Parliament passed three agricultural bills which collectively seek to provide farmers with multiple marketing channels and provide a legal framework for farmers to enter into pre-arranged contracts among other things.

The government in its defense said that the new laws will give freedom to farmers to sell their produce outside regulated markets and enter into direct contracts with buyers at a pre-agreed price.

The government also hopes that its new policy will double farmers’ income by 2022.

On the other hand, this law doesn’t seem much appealing to the farmers.

Farmers’ associations say that the legislation doesn’t guarantee the acquisition of farm produce through state-run organizations that guarantee a Minimum Support Price (MSP), thus leaving them at the mercy of corporations that are now expected to enter the country’s troubled farming sector.

Let us all hope for a peaceful and mutual agreement between the farmers and government so that no one suffers.

“We are fighting for our rights. We won’t rest until we reach the capital and force the government to abolish these black laws,’’ said Majhinder Singh Dhaliwal, a farmers’ leader.